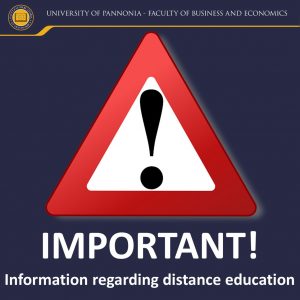 Please note that the University of Pannonia will conduct all official communication through the NEPTUN system. For smooth operation, please make sure that the email address entered in NEPTUN is the one you are checking in a regular basis.

Students who are not staying at their permanent or temporary address for the remainder of the semester are kindly requested to keep their notification address up to date on NEPTUN (within 72 hours). Our goal is to seek government assistance to overcome the difficulties in those regions where distance education is not possible.

If you have not done is thus far, please activate your central directory account at https://start.uni-pannon.hu, as this ID will provide you access to university systems in the future.

Our lecturers will notify you in what form distance education will take place in the case of their courses, as soon as possible. It is expected that the online courses will be taught through the following educational system, so we encourage you to try:
https://elearning.uni-pannon.hu/

We recommend and support Skype for secondary group activities. After activating your account with your university email address at start.uni-pannon.hu, you can join by creating a Microsoft account.

Lecturers may use additional systems that are specific to the course, in this case they will provide additional information.

Please note that the “Special Needs Student Application” in the NEPTUN System is still open!

If you have an infrastructural problem with distance education (e.g. no broadband internet connection at notification address and/or lack of equipment necessary for distance education), please contact us (oktatas@gtk.uni-pannon.hu, (88) 624-000/6245).

It is in our common interest to complete the current semester successfully, therefore we count on your cooperative attitude as well. Please help us disseminating official information to your fellow students as much as you can.

The rector and chancellor of the University of Pannonia hereby issue the following decree with respect to the state of emergency announced by the Hungarian government on March 11th 2020: Prof. Dr. Constantin Bratianu is professor of Strategic Management and Knowledge Management at the Faculty of Business Administration, Bucharest University of Economic Studies, Romania. He is Director of the Research Centre for Intellectual Capital, same university. He obtained his Ph.D at Georgia Institute of Technology, Atlanta, Georgia, USA. He is a member of the American Academy of Management, USA, and International Association of Knowledge Management. He has been Visiting Professor at universities in USA, Japan, Austria and Egypt. He is a member of the Scientific Committee of the European Conference of Knowledge Management. He published over 30 books, and over 200 papers in international journals and international conference proceedings. His main academic interests are: knowledge dynamics, knowledge management, intellectual capital, and strategic management.

In Prof. Bratianu’s course (21st-25th September 2015) the students can learn about the theory and practice of knowledge management and relating approaches including:

This course invites bachelor and master students of the Faculty of Business and Economics and ERASMUS students of University of Pannonia.

The Knowledge Management [Tudásmenedzsment in the Neptun] (VEGTVESV44T) is free of charge for the students and 6 credits can be obtained.

In case of any question please feel free to contact Dr. Anikó Csepregi (e-mail:csepregia@gtk.uni-pannon.hu; building A, 1st floor, office A129c) at the Department of Management, Faculty of Business and Economics. The latest issue of the Newsletter magazine has been published.

The Newsletter is available in the Centre of Marketing and International Relations and electronically here.